Behringer Xenyx 502 is one of the best mixer that any songwriter can afford in their home studio. The quality is world class and the sound is superb. I’ve been using this for 5 months already with no regrets. But just like any other type of songwriter gears ,there are always advantages and disadvantages of certain gears. This is an honest review I would like to made for this gear and I will detail it into:

a. Price
b. Features/Functionality
c. Sound and Compatibility

OK here we go, the mixer is made by Behringer and the Xenyx series has actually several types of mixer classified according to the number of inputs and features. There are Xenyx 802, Xenyx 1002 and other big mixer in the Xenyx Series. More info on other types of Behringer Xenyx Class Mixers 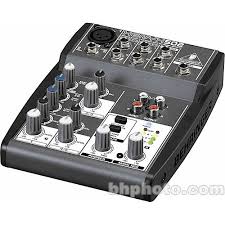 – I buy Xenyx 502 for around 3500 pesos only in the Philippines, this is equivalent to around $78. I shop today and it is priced at around $45! I know I buy it a higher price but in January 2008, I really do not have other choice such as buying online and shopping other stores. Shops that sell high quality mixers such as Behringer is rare in this country, so I could expect a bit higher. So at this price I could say it is affordable even to a music student.

This mixer has around 5 mono inputs, so a recording of 5 mono inputs can be done simultaneously which is more than enough for any songwriter recording demo at home. Almost all of the recordings will be done in multi-track, and it will be very rare to record 5 mono inputs at the same time. There is a line input and microphone input (with XLR input also), but I am using line input most of the time to record instruments such as guitar and keyboards.

The volume control for line inputs is wired parallel so this means that for Line input 2 (left) and Line input 3 (right) it can be controlled by only one level control knob designated as “Level 2/3″.

But if you have decent speakers with powerful amplifiers within, there is no need to use the mixer to boost the speaker volume. Typical affordable speakers such as ATP 3 Altec Lansing can do this job decently.

This is a great feature which I really like so much. Before my recording method is so crude and I connect the guitars directly to the sound card (yeah it happen to me once), the recording signal is very poor. After using this mixer, the signals are amplified and cleaned, the result is superb sound recording. The pre-amp is very powerful and it can even do a decent job in amplifying a very weak passive bass guitar sound.

I can say that the noise reduction ability of Behringer Xenyx 502 mixer is great. Before when I record without this mixer, the noise level occupies around 20% to 40% of the signal wave like doing a bass guitar recording. Now the noise is significantly reduced, and the sound is cleaner than before.

Before I use a mixer, the bass response is thin. Now, with the mixer, it can now pickup a wide frequency response. I read their manual and they do have wide response.

Overall: If you are a songwriter needing a mixer for your home studio. This is a great option to consider in terms of cost and performance.

This site uses Akismet to reduce spam. Learn how your comment data is processed.